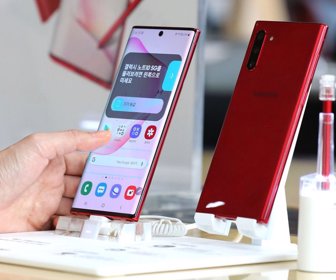 The ‘KlaytnPhone,’ a Galaxy Note 10 variant, will come with blockchain apps and a cryptocurrency wallet installed
The Wall Street Journal
Samsung Electronics Co. is releasing a variant of its newest flagship phone in support of the adoption of next-era technology blockchain, according to people familiar with the matter.
The world’s largest smartphone maker will offer a Galaxy Note 10 marketed as a “KlaytnPhone,” named after a South Korean blockchain platform, the people said. Sales of the phone were set to begin Thursday, exclusively in South Korea.
Samsung is joining with Ground X Corp., the blockchain affiliate of Kakao Corp. , South Korea’s largest messaging-app operator. Ground X created the Klaytn platform.
The new phone marks Samsung’s deepest foray into blockchain, a technology that has been slow to catch on and that still puzzles many consumers.
Blockchain relies on encryption to cloak a range of transaction data, from digital-currency ownership to supply-chain operations. Enthusiasts view the technology as a potential game-changer in an era of cybersecurity breaches, data-privacy concerns and distrust of institutions from governments to large tech companies.
The KlaytnPhone won’t differ in hardware or packaging from the two sizes of the Galaxy Note 10 that hit shelves last month, according to the people familiar with the matter. It is expected to be sold at similar prices, starting at around $1,000.
The phone will show Klaytn’s logo when it is turned on or off, and come installed with blockchain apps and a wallet for so-called cryptocurrencies, the people said. Buyers will get a certain amount of a new digital currency, called “Klay” coins, to use, they said.
A Samsung spokeswoman declined to comment. Ground X says the company is committed to bringing blockchain technology to everyday life.
Separately, Samsung said the Galaxy Fold, which folds like a book and boasts a tablet-sized screen, would hit shelves Friday in South Korea. The launch of the roughly $2,000 device-the mainstream industry’s first such handset-was delayed in April after tech reviewers discovered design flaws.
Samsung waded into blockchain in March with another flagship device, the Galaxy S10. At the time it didn’t explicitly release a blockchain-themed variant. But certain models of the Galaxy S10, as well as some previously released versions of the Galaxy Note 10, came with a feature that let users safely store and use cryptocurrencies through a security feature that operates separately from the rest of the device.
The blockchain apps running on Klaytn’s platform are accessible on smartphone brands, besides Samsung devices, that use Google’s Android operating system. But only the Klaytn edition will boast the blockchain platform’s full breadth of transaction services, according to people familiar with the matter.
Samsung’s blockchain-customized Galaxy Note 10 variant won’t be the first smartphone that aims to facilitate use of blockchain technology. Both Taiwan’s HTC Corp. and Switzerland-based Sirin Labs launched blockchain-enabled phones last year.
Blockchain backers believe adoption could grow if device makers like Samsung offer a ready-made blockchain ecosystem, such as pre-installed apps and security features. It would simplify a process that is often cumbersome and confusing, and offer consumers more security, the enthusiasts say.
Edith Yeung, a managing partner at Proof of Capital, a venture-capital fund, compared the current awareness of blockchain-equipped handsets with consumers’ understanding of smartphones when Apple Inc. launched its first iPhone, more than a decade ago.
“We’re at the original iPhone era, where people are asking, ‘What is this?’” she said.
Even if Samsung’s blockchain phone takes off, it won’t be a big sales driver as South Korea makes up a fraction of its total business. Seoul-based brokerage CSLA forecast in August the company will sell around 10 million Galaxy Note 10 devices world-wide.